An In-Depth Look at Human Digestion

An In-Depth Look at Human Digestion

Human digestion starts at the mouth and ends with the anus. There are several mechanisms in the mouth that immediately begin to break down the foods we eat and prepare them for the rest of the digestive process. Through the process of mastication, or chewing, we are physically breaking the food into smaller pieces, which will help it travel more easily through the rest of the digestive system as well as increase the surface area available for the chemical agents in our body to bind to and break down the food. 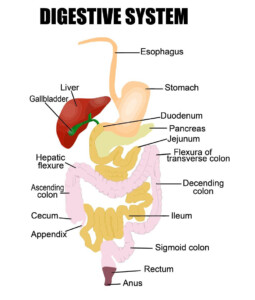 Glands under the tongue secrete saliva, a mixture of water, mucus, proteins, mineral salts and the enzymes lingual lipase and salivary amylase. Saliva moistens the food and begins to break down the fats and carbohydrates while the teeth and tongue combine the food into a mushy ball.

As we swallow, this ball, now referred to as a bolus, is pushed to the back of the oral cavity and into the esophagus. A flap of muscle known as the epiglottis closes over the trachea, or windpipe, preventing any swallowed solids or liquids from entering the lungs.

Once in the esophagus, the bolus is moved into the stomach via a process called peristalsis, which is a downward wave of muscle contraction. Peristalsis continues through most of the digestive system and is the primary mechanism that moves foods through the digestive tract.

The stomach is essentially a bag made of three layers of muscle. Because of this muscled composition, the stomach is capable of contraction and expansion. It can expand to accommodate roughly a liter of food and liquid at once before any distention pressure is felt. It is also this ability to expand and contract that allows the stomach to mix, grind and churn the bolus. Additionally, 1.2 to 1.5 liters of gastric juice is secreted per day into the stomach.

Gastric juice is a mixture of water, hydrochloric acid, electrolytes (sodium, potassium, calcium, phosphate, sulfate, and bicarbonate), mucus and enzymes. This juice is highly acidic due to its hydrochloric acid content and contains enzymes, both to break the bolus down further and make it more soluble in preparation for the absorption to occur in the small intestine. At this point, the semisolid mixture created from the bolus is called chyme. While in the stomach, some absorption can occur though not very much. Small amounts of fluid (such as water and alcohol) can be absorbed from the stomach as well as some simple sugars like glucose and some amino acids. Many pharmacological agents are absorbed here as well.

The time that the chyme stays in the stomach depends on the chemical and physical composition of the meal as well as the specific physiology of the individual. Fluids empty the most rapidly followed by carbohydrate, protein, and fat in that order. 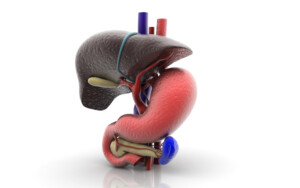 After an average of 2 to 4 hours in the stomach, when the food particles in the chyme have been reduced sufficiently in size and are the appropriate level of solubility, the chyme will move through the valve at the base of the stomach, called the pyloric sphincter and into the first section of the small intestine.

These hormones signal for the pancreas to deliver pancreatic juice, which contains the enzymes trypsinogen, chymotrypsinogen, elastase, carboxypeptidase, pancreatic lipase, nucleases, and amylase as well as bicarbonate. The bicarbonate concentration neutralizes whatever stomach acid comes with the chyme so that the enzymes are able to work and the small intestinal wall is not damaged by the hydrochloric acid. 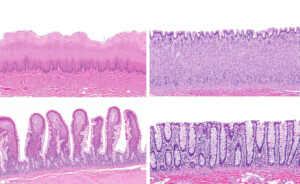 Cross section of the small intestine at increasing magnification.

Cholesystokinin and secretin also signal for the sphincter of Oddi, a valve at the base of the common bile duct to relax, releasing bile into the duodenum. Bile is a brownish yellow liquid that is continuously produced by the liver. It is composed of water, bicarbonate, phospholipids, bile salts, emulsifying agents, cholesterol, and bile pigments. It is stored and concentrated in the gallbladder until release into the duodenum for digestion. Bile serves important functions in fat digestion, coating fat particles from food and allowing greater surface area for pancreatic lipase to work.

The combination of enzymes and bile acids serve to further reduce the particle size and increase the solubility of the chyme. This allows for the nutrients within the food to pass through the walls of the small intestine and be carried throughout the body for use. Enzymes within the walls of the small intestine carry out any final breakdown of nutrients as the chyme travels toward the large intestine.

The remaining length of the small intestine is divided into the jejunum and ileum. These sections are much longer than the duodenum. The jejunum is the middle section and is roughly 8 feet long while the ileum, the final section of the small intestine, is nearly 12 feet long. The chyme travels along the length of these sections and the useable nutrients are slowly absorbed as it completes its journey to the bowel.

The total estimated surface area of the small intestine is approximately 5,400 square yards. This incredible surface area is provided by the unique structure of the cells that line the interior of the small intestine, which is arranged in a series of concentric folds that take the shape of transverse ridges along its length. These folds, called plicae circulares or valves of Kerckring are present in almost the entire small intestine with the exception of the first few inches near the stomach and last few inches near the large intestine. 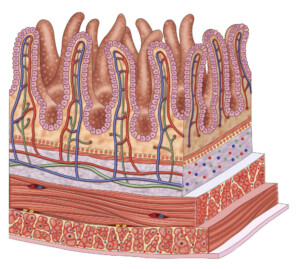 Surface area of the small intestine is also increased by the tiny projections called villi that make up the mucosal barrier. Inside of the villi is a loose structure of connective tissue containing a network of blood vessels, a central lacteal, and muscle tissue. There are specialty cells called goblet cells scattered among these villi that secret mucin, the primary constituent of mucus.

At the base of these villi, there are depressions referred to as intestinal glands or Lieberkuhn’s glands. In the bottom of these depressions are epithelial cells called cells of Paneth that are filled with enzymes that are toxic to bacteria and immunoglobins.

Additionally, there are undifferentiated cells, more goblet cells, and endocrine cells located in the Lieberkuhn’s glands. The undifferentiated cells serve to replace losses of other types of cells as they can undergo changes in structure as appropriate. Endocrine cells release hormones from the endocrine system into the small intestine to modulate multiple physiological functions including release of enzymes, release of hormones and control intestinal motility.

The mucosal villi are additionally covered in tiny, hair-like projections called microvilli. They are small enough that each villi may be covered with as many as 1000 microvilli. These microvilli make up the primary site of nutrient absorption in the body referred to as the brush border.

Water and other solutes pass through the pores in these microvilli via active transport and drag caused by differences in osmotic gradient between the lumen and cytoplasm. The size of these pores differs along the length of the small intestine. This pore size difference in combination with receptor specificity along the length of the small intestine is why different nutrients are absorbed in different sections. The microvilli also secrete the digestive enzymes disaccharidase and peptidase that hydrolyze sugar and protein molecules respectively.

Enterocytes here are joined near their apex by strands of proteins connecting them in what are known as tight junctions. These tight junctions serve to keep larger molecules out of the bloodstream and it is thought that they are modulated as part of the immune system.

The juncture of the small intestine and large intestine is the illeocecal valve. Whatever remains of the chyme will pass from the ileum into the cecum, the first section of the large intestine, here.

The large intestine, also called the colon, is the last part of the digestive system. It is roughly 5 feet long and 2.5 inches wide. The large intestine is divided into four sections, moving from the small intestine to the rectum: the cecum, ascending colon, descending colon, and sigmoid colon. Structurally it is similar to the small intestine with the exception of the villi and microvilli. The muscle fibers making up the large intestine are arranged such that the interior of the colon forms circular furrows of varying depths called haustra. There is a small pouch connected to the cecum known as the vermiform appendix, or just appendix. Though it is surrounded by a concentration of immune cells, it was long believed to be a useless evolutionary vestige. New evidence indicates that the appendix may serve as a reserve of healthy bacteria to help repopulate the gut after a colony destroying illness. 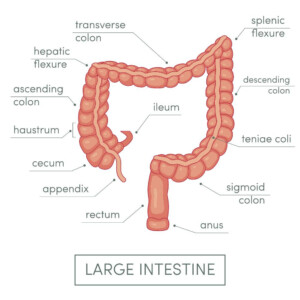 The majority of the microbes living in the body are found in the large intestine. These large numbers of bacteria synthesize niacin (nicotinic acid), thiamin (vitamin B1) and vitamin K, vitamins that are essential to several metabolic activities as well as to the function of the central nervous system. Additionally they ferment otherwise indigestible chyme remnants into forms usable by the body. These monosaccarides can be absorbed in the large intestine as well. A byproduct of the fermentation (cellular respiration) occurring in the bowel is gas production.

The gas referred to as flatus is mostly composed of non-fragrant gases: nitrogen, oxygen, carbon-dioxide, and methane. Only <1% of the compounds in flatus are responsible for its distinctive odor. These are volatile sulfur compounds and are a combination of hydrogen sulfide, methyl mercaptan, dimethyl sulfide, and dimethyl trisulfide.

Once the rectum reaches a certain volume of feces and/or flatus, signals are sent for the urge to defecate. The anus is voluntarily relaxed and feces is pushed out of the body.

This completes the digestive process.