Bad Actors in Our Diet 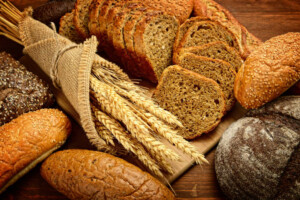 Gluten is the combination of two proteins (glutenin and gliadin) which are found in wheat, barely, rye and hybrid grains of those three.

Gluten is the protein responsible for giving bread and other baked goods their structure, consistency and texture. When mixed with water, gluten forms the “glue” that holds bread together and gives it the fluffy, elastic texture we all love.

Gluten is a plant protein found in cereal grains, particularly in wheat. Fruits, vegetables and animal foods such as dairy products, meat, poultry and fish in their natural state are all gluten-free as long as you don’t add anything like breading or sauces to them. Wheat (containing gluten) is often used as a cheap filler and protein source, so thousands of processed foods often contain it.

To learn which foods have gluten and which don’t takes a little bit of label-reading. Thanks to the FDA Food Allergen Labeling and Consumer Protection Act, it’s gotten a bit easier. If a food sold in the United States contains gluten (this includes flavorings and seasonings), it must be declared on the label.

Gluten can be found in many places that are not so obvious such as bouillon cubes, gravy, hot dogs, soy sauce, frozen vegetables in sauce, french fries and much more. If you haven’t been diagnosed with celiac disease, DigestShield® is the perfect solution to shield your body against reacting to gluten in your diet. 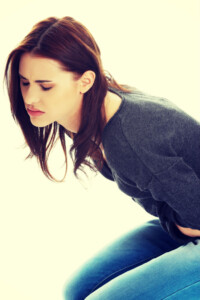 There is a well-documented form of gluten intolerance known as celiac disease which, according the the National Institutes of Health, affects approximately one in every 141 people in the United States. When a person diagnosed with celiac disease consumes gluten, it triggers an adaptive immune response that damages the villi lining the intestines, preventing them from absorbing vital nutrients.(1)

Recently, scientists have become aware of another form of gluten intolerance called non-celiac gluten sensitivity (NCGS). After consuming gluten, people with NCGS may experience many celiac disease-like symptoms such as diarrhea, fatigue, brain fog, indigestion and joint pain, but don’t present with the classic damage to their intestinal villi. (2)

Researchers think that non-celiac gluten sensitivity (NCGS) is much more common than celiac disease, affecting as many as 18 million Americans. (2) It is important to consider that it is only in the past five years or so that we have seen a sudden rise in sensitivity to gluten with no end in sight. This begs the question, what has changed?

No one can say with certainty what the cause is but one thing is clear: people don’t seem to be able to digest gluten and wheat as well as they used to. DigestShield® was created to address the problems associated with digestion of gluten and other “bad actors” in our diet such as dairy, soy, lectins and more. 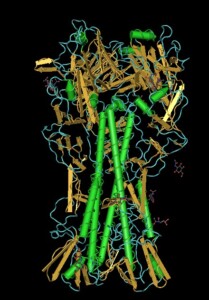 There are many nasty things in this world of which we must be aware and careful. They can be in the air we breathe, the water we drink or the food we eat. They are nasty because they can make us sick, limit our vitality, rob our intelligence and shorten our lives. Many of the nastiest things that do the most harm are things we can’t see. Among the worst of these are lectins.

Plant lectins are found in roughly 35% of the foods we eat. They are found in all grains, legumes, nightshade fruits such as eggplant, peppers and tomatoes and the only nightshade vegetable, the potato. They are also found in nuts. Lectins that are suspected of doing the most harm to people who cannot tolerate them are found in wheat, soybeans, potatoes, peanuts and dairy. (3)

Some lectins are not affected by heat or enzymes in the stomach so they move freely into our intestines. (3)

Think of lectins as proteins containing a key that fits a certain type of lock. This lock is a specific type of sugar that coats every cell much like the candy coating around an M&M®. If a lectin with the right key comes in contact with one of these “locks” on an epithelial cell in the gut wall, it “opens the lock”, that is, it disrupts the membrane, damages the cell and may initiate a cascade of immune events leading to further damage. This immune response can lead to inflammation and cell death which in turn can create openings for lectins to get into our bloodstream and organs (leaky gut syndrome). (4)

Lectins can be inactivated by specific carbohydrates (called oligosaccharides) which can cover the “key” and prevent the protein from attaching to the carbohydrate “lock”. Chitosan Oligosaccharide, also known as n-acetyl d-glucosamine, is a sugar that specifically targets wheat lectin. (5) This is the decoy we place in every DigestShield® capsule that can protect the gut and joints against inflammation.

DigestShield® contains the exact sugar to which wheat lectins like to bind. This keeps them from attaching to us! 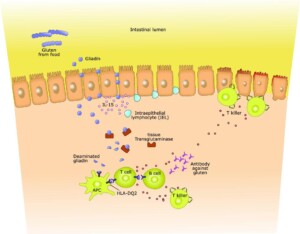 Leaky Gut Syndrome is characterized by increased intestinal permeability or intestinal hyperpermeability. This can happen when tight junctions in the gut, which control what passes through the lining of the small intestine, are caused to open. (7)

This is a very complex process that can begin when gliadin in wheat interacts with epithelial cells in the gut wall. It is now known to be the chief activator of a highly destructive immune cascade and is most dangerous to people who have a genetic predisposition to this reaction. (6) 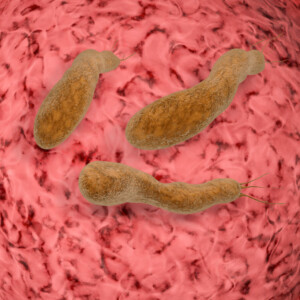 There is a large group of various microbes which can be classified as bad bacteria.

These include Helicobacter pylori, Bacteroides, Peptococci, Staphylococci, Streptococci, Bacilli, Clostridia, Enterobacteria, Fuzobacteria, Eubacteria, Catenobacteria, yeasts such as Candida and many others. (7 – 9)

There are around 500 to 1,000 various species of microbes known to science so far, which can be found in the gut. (8)

In a healthy person, their numbers are limited and are tightly controlled by the beneficial flora.

Each of these microbes is capable of causing various health problems if they grow out of control. It is normal for many of these species to be found in the gut in certain quantities but can be damaging to our health when they overpopulate. Beneficial bacteria, or probiotics, keep the population of bad gut bacteria under control. (7-9)

DigestShield® contains 11 different probiotic bacteria species as well as prebiotics, which work together to promote optimal health inside our gut.